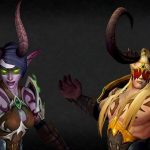 World of Warcraft’s latest installment Legion will include many new features and improvements. But what is most important, it will feature Illidan Stormrage from 2007’s The Burning Crusade. WoW: Legion will also raise the level cap to 110 and will have a Demon Hunter class.

Nine years passed since Illidan was killed in The Black Temple. To our surprise, it seems that the Lord of Outland not only survived the attack but also returned to run a new generation of Demon Hunters with the main purpose of fighting the Burning Legion. Blizzard announces that Illidan’s return was planned long time ago with concept preparation appearing as early as during Mists of Pandaria in 2012. In interview with GameSpot WoW: Legion director Tom Chilton and senior art director Chris Robinson answered some questions about the overall process. You can find the full interview below.

Chilton: We did have a sense that we were going to come back to it at some point, but we didn’t know exactly when that would be. There are a lot of loose ends in the Illidan storyline, and in this expansion a lot of those loose ends get tied up. When you create a Demon Hunter, one of the first cinematics that you see kind of launches off right at the point where The Black Temple is being raided in Outland.

So you get sent off at that point, and when you come back you see another cinematic that ties off what happened right after the raid ended. And then later on, as you go through The Broken Isles, there’s an Illidan questline where you relive some of his memories and get to know a little more where he came from, and that all leads to a crescendo at the end game.

Robinson: I think there’s also a fantasy of, we saw what happened when [The Burning Legion] invades another land and we beat them back, but never really saw the culmination of what happens when the Legion takes something over. But there’s always that core kernel fantasy of what if the threat came back home. That’s where we started talking about it. He’s such a central character to all of that, and if you tell the story of Legion and how it relates specifically to the Demon Hunter class, you really need him to be part of that story to pull it home, and show that the Legion is coming to Azeroth and what it means to players and the whole world. Ideally, that would fulfill that fantasy that we started with Burning Crusade. I think a lot of Burning Crusade was an introduction to what we wanted to do with that character and with the storyline of the Legion.

Chilton: [Illidan] is kind of the manifestation of anti-Legion.

Tell us more about introducing Demon Hunter class. Have you considered other options or maybe even adding a new race to the Legion also?

Chilton: For this expansion, really the only one we ever considered was the Demon Hunter. We’ve always said, “You really can’t put an unlimited number of character classes into WoW.” There’s probably some finite limit to the number of classes you can add to the game before they start kind of cannibalizing each other too much. But we always said, “But if there’s one more class, it’s got to be the Demon Hunter!” This expansion was just the perfect opportunity to do it. It could have made sense in The Burning Crusade, but because we chose not to do a class and do races instead, in this expansion it felt like putting our energy and effort behind that was really what made sense. But as result of that, we also didn’t really consider new races seriously.

Could you tell us more on how the direction of a new WoW expansion is decided? Where this process starts from?

Chilton: It’s a really long process. We started to concept Legion all the way back when we were wrapping up on Mists of Pandaria. We had this idea that Mists of Pandaria would lead into Warlords of Draenor, which would lead into Legion. Some of the earliest parts of the design of Legion were as far back as that, identifying what the core elements were.

Robinson: We’re all fans too; I think that is the key to it. A lot of us started working on it since we’ve joined up until today. What’s really cool about that process is that we can get into a room and talk about how this is not only an opportunity to not only push the story forward, but to experience a lot of the things that are part of our storyline that we as players want to see and do. It’s actually a really awesome process where we get in a room and just start talking about where we’re at, what tone did we set previously?

Mists of Pandaria just came out and it was tonally different with what’s happening in the world and introducing a lot of new ideas that we hadn’t had recently. Do we want to pull it back now to core fantasy, like Warlords of Draenor? Or do we kind of want to keep going in the other direction? We bounce it back and forth and question everything we’re doing. Ultimately we figure out what is the best way that we as fans and players, and people working on it, want to continue telling that story.
World of Warcraft is one of the most successful and longest-running MMO games in the entire world. What makes it so special?

Robinson: It’s the players. First and foremost, I think that… you can only really set things up for people to play it in a way that they’re going to play it. And meet the people that they’re going to meet, and bring their friends in, make new friends in the game. And really change the face of how we develop the game and the decisions that we make. I think that can go either way. It can be a negative thing if we listen too much to the outcry about certain things–we do need to stay true to what we feel like is the right thing to do for the game. But certainly as we’ve gone on and made certain decisions and see how they’ve impacted gameplay and our player experience, it’s informed the way that we’re going to do those things in the future.

From my personal perspective, just feeling like, as a player, you have a chance to change the world that you’re in, and it’s not something that’s just a decision made somewhere else that you’ll never have an impact on. But your voice matters and you can get into it and own it, be a part of it and feel that ownership and care for Azeroth and the inhabitants of the game. We can make it pretty, we can do a pretty design, make an amazing number of decisions, but if that player doesn’t drive that and interact with each other then it will fall flat on its face, and it wouldn’t have lived anywhere near as long as it has lived so far.

Maybe you can provide us an example of how player feedback has affected WoW: Legion?

Chilton: Frankly, everything. If you think about player feedback in terms of our approach to the end game, we tried something different with Warlords with the daily point of interest objectives. In Mists, we had the daily quest model and we got a ton of feedback that it was too repetitive, too stagnant. So we felt like if we gave a choice of different places to go on any given day and if there was more freeform that it would help keep them fresh. But at the end of the day we weren’t happy with that result and that comes from player feedback, so we moved to the world quest model with Legion as a result of that. That’s just one example. Everything that we do is somewhat informed by what the players feel about it.

Robinson: I think that permeates every level, too. Like major big overarching decisions like Tom’s talking about down to the minutiae…which isn’t actually minutiae, it’s very important stuff, like character customization. Working with demon hunters and putting out the initial pass of horns and tattoos and skins that you’re going to be experiencing and hearing people talking about how there’s no attractive options. Or how maybe these tattoos don’t really fit the fantasy of what they expected to see from the Demon Hunter class. We listen to all that stuff and take a look at what we’re doing and make adjustments. With character customizations and doing the artifact weapons and listening to what the fantasy was, because a lot of that is based on player experience and fantasies they have about what those weapons are going to be. The fact that we made several versions of every artifact allowed the opportunity for us to hear the people talking. So we’ll take that in and re-think our approach based on what we hear people talking about.